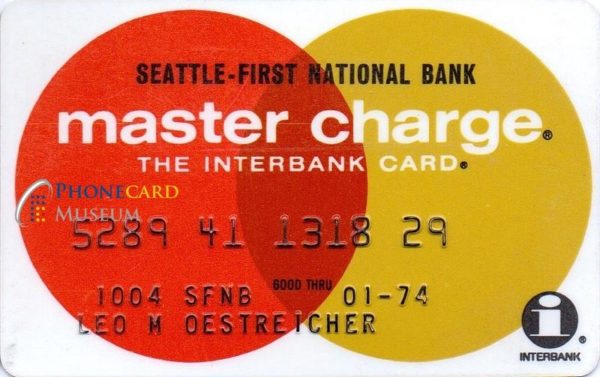 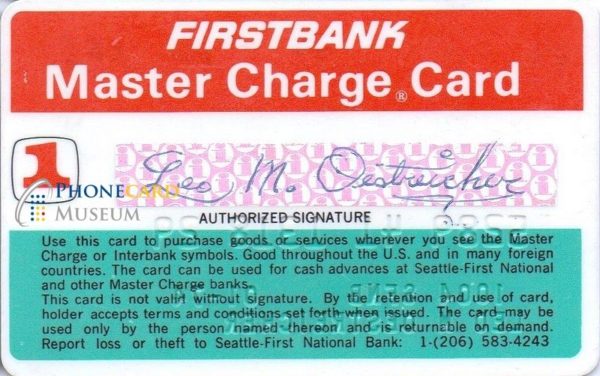 Seattle First pioneered the move toward credit cards in Washington state by issuing Firstbank cards in 1966, and the installation of automated teller machines in 1968. The Interbank logo appears in 1968 expiry cards, and from 1969 Master Charge credit cards were issued.
Magnetic stripe coding was added from around 1974.
Magnetic Stripes  also see history on Wikipedia

Seattle First National Bank is as the name suggests, the oldest bank in Seattle, and is an wholly owned subsidiary of BankAmerica Corporation. Seafirst, as it is commonly known, had it’s beginning in 1870 Dexter Horton and his mercantile partner David Phillips, started up as Phillips, Horton and Company. in 1882, George W. Harris obtained a national charter and the bank was renamed First National Bank of Seattle. The following year, Puget Sound National Bank was founded. These two banks, along with Dexter Horton and Company, would form the nucleus of what would eventually become Seafirst.

The dramatic increase in oil prices during the 1970’s spawned a multi-billion dollar energy exploration industry with which Seafirst became heavily involved. When oil prices began to drop in the early 1980’s, Seafirst found itself wearing huge yearly losses, but the bank was rescued as a result of its acquisition by BankAmerica Corporation in 1983
By the early 199’0s, Seafirst began again to post enviable profits, also absorbing 82 former Security Pacific branches from the 1991 merger of BankAmerica and Security Pacific.