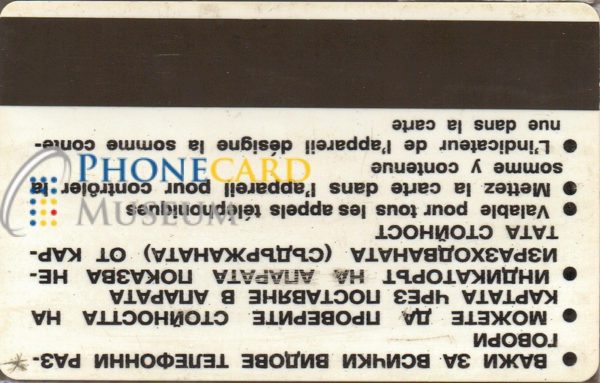 Bulgaria Magnetic
with “TEST” in BLUE
TEXT on reverse

This is the third test card for Bulgaria that we know of.
Black text on front, with “TEST” in blue. Magnetic reverse WITH instruction text. Similar text is used on all subsequent trial issues.

In 1981 Bulgarian Ministry of Telecommunications began to form a business arrangement with Alcatel to supply magnetic Phonecard operated public telephones. The Telecom authority wanted to produce the magnetic cards themselves and set up limited trials of locally produced phonecards of two main types, white and black. A white card series are compressed card, and the black series are plastic. The magnetic bands are of ISO123 standard.
The quality and performance of the cards proved to be not of a standard needed for a national phonecard payphone roll-out, so in 1985, the ministry began testing magnetic cards produced by ZIMEX in Eastern Germany. There are a group of single cards produced between 1985 and 1987, relating to various large utility or manufacturing companies. It is the opinion of the museum that these were in fact closed phonecard field trials to evaluate the cards of ZIMEX. Any reliable confirmation would be appreciated, as well as any documentation we could publish.
A small scale trial followed in 1987 with 3 digit serial cards (87 dated on reverse), with the same 4 card values as the 1982 trials, and National roll-out in 1988, with the same easily recognizable public issue of 1988.(88 dated on reverse)

Be the first to review “BUL-0010-MAG-LOC” Cancel reply