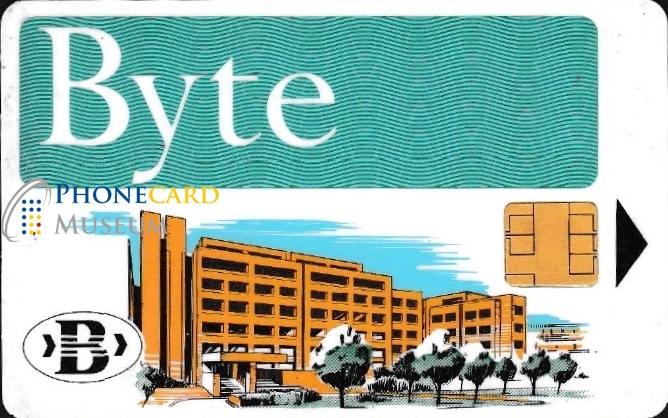 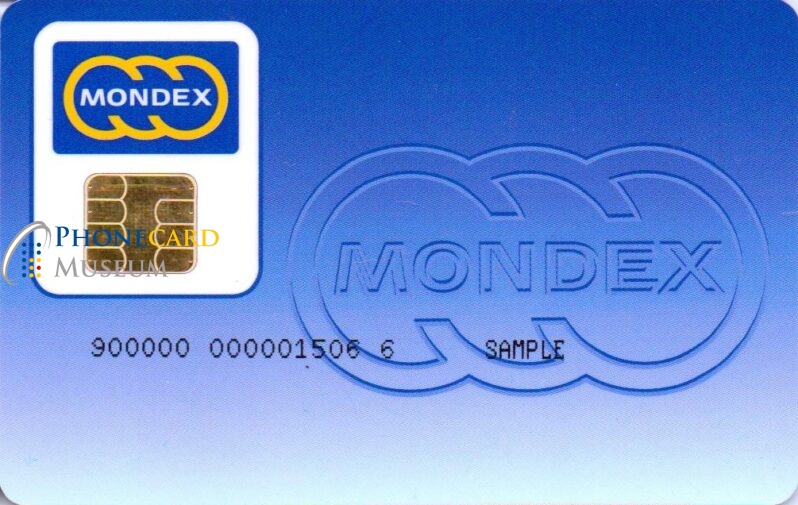 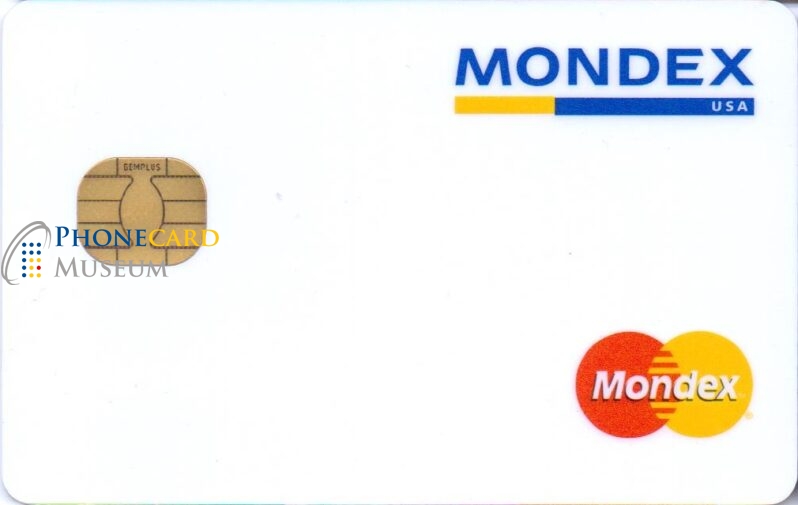 Mondex was the name chose for an e-purse payment product (or SVC = Stored Value Card) to be used for storing and using Electronic Cash. Designed to be a total cash replacement, it was launched in a public trial in Swindon UK in July 5th.1995.
Mondex cards UK
It was intended to facilitate electronic cash payment, deposit, and person to person transfers, as an easy alternative to physical cash. The idea, conceived in the early 1990's, was the brain-child of two employees from the National Westminster Bank (NatWest) Tim Jones, and Graham Higgins.

How it worked
As it was envisioned, the card was to emulate physical cash. The cardholder downloaded an amount of cash from a linked current account. Merchants who had the Mondex POS terminals installed would accept payments from the inserted card. The merchant also had a card inside the POS terminal. The purchase amount would be deducted from the customer's card, and deposited to the Merchant card inside the terminal, much like a normal cash till. At end of day, the merchant could deposit the day's takings at a Mondex enabled ATM to their linked merchant bank account.
The huge advantages of this process are tied to no cost of handling and counting cash, and especially the lowered security risk of large amounts of cash in transit.
The whole commercial process here was a closed loop, from customer bank withdrawal, purchase, to Merchant deposit. Clean and streamlined. The system worked!

The first iteration of the product, in March 1992, was called "Byte Card" This name was reportedly chosen because of the association with computing, and eating. (haha)
On some of the early Byte card we see a sticker with "Volga Test card" which was the project name.
At first the cards were produced by Gemplus incorporating a 2K EEPROM chip. 3 specific card designs are known for the early Byte issue, Cuctomer card, Retailer (Merchant) card, and Bank Dispenser (ATM) card. 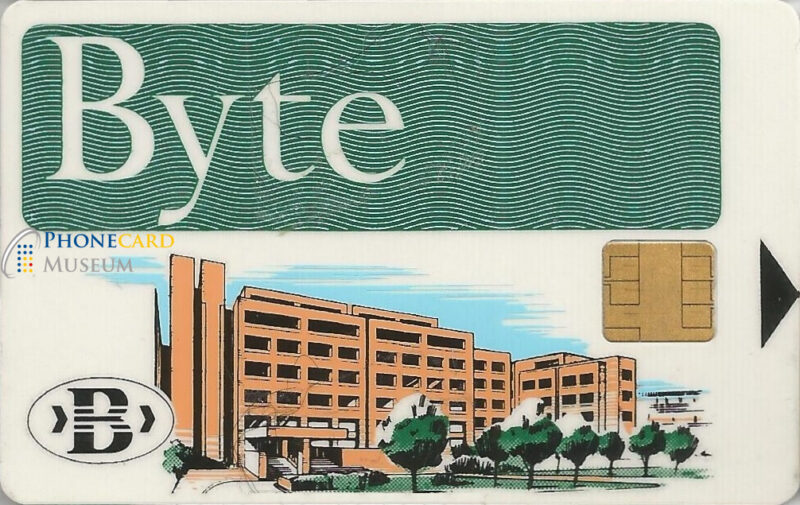 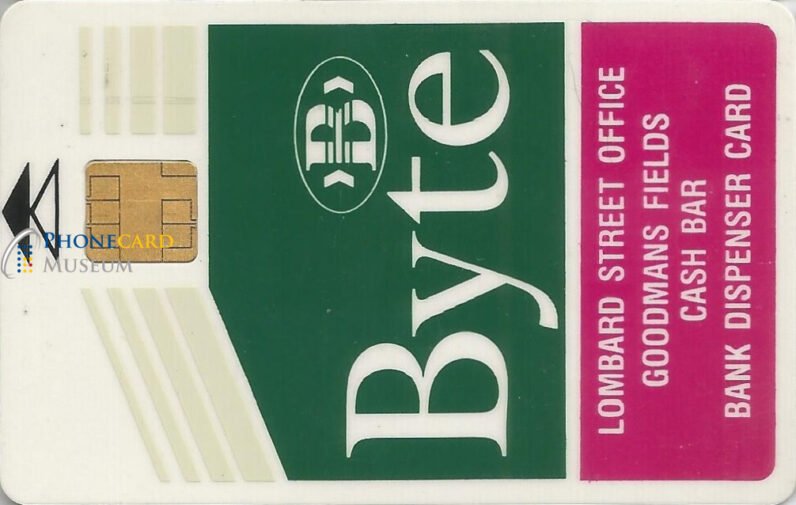 As testing continued it was decided that the transaction response time was too slow, and chip capabilities were not what the end product required.
Here we can show some early Byte card publicity for the Goodmans fields Centre. 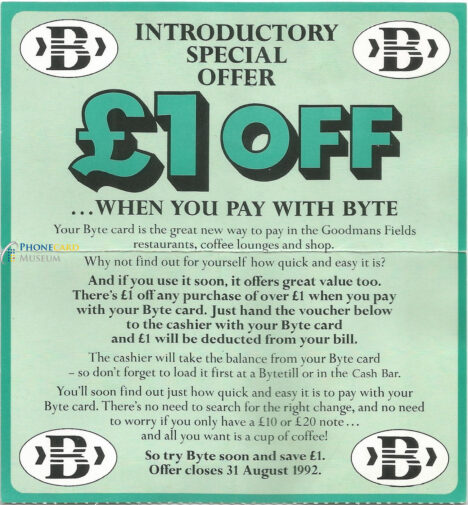 Byte card iteration
As early as 1993, the Byte card with more advanced chip interface were being issued internally in the Goodmans Fields Data centre of Natwest Bank. Natwest issued approximately 6000 cards (mostly Byte card?) to employees within the centre. 100 cards were the first issue quantity, and by September approximately 5000 cards had been issued. Employees and some local workers could pay for meals, or refreshments at 2 restaurants, plus shops and coffee lounges. Cards were issued free to staff, and could be topped up to £50 at the local branch or at a small number of Byte enabled in-house ATMs in the centre. Staff inserted their normal account card into the ATM (PIN entered) and then the Byte card when asked, and the amount would be transferred to the Byte card instead of notes being dispensed.

At some point the Byte cards were no longer issued as the design was replaced by Mondex. More information needed.

The Swindon trial was to be jointly sponsored by NatWest, HSBC (at the time Midland Bank) and British Telecom (BT). To this end a separate organization, Mondex International, was formed to own and manage the Mondex scheme. The Byte card was replaced by Mondex with Logo (on centre card above) This organization would recruit international banks to launch pilot programs within their own territories, and with the local currency.

As noted above, the Swindon trial launched on 5th July 1995. Adapted ATMs were deployed, as well as Mondex enabled payphones developed and supplied by BT. BT also produced home phones with Mondex functions (more detail needed) and we can show the BT photos of these phones. (Thanks Philip) We are looking for the BT test card for the reference collection. 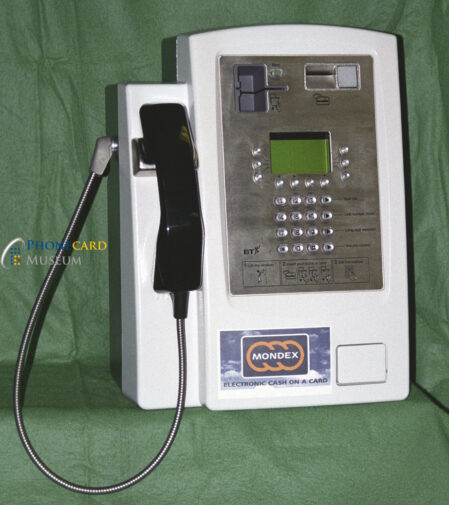 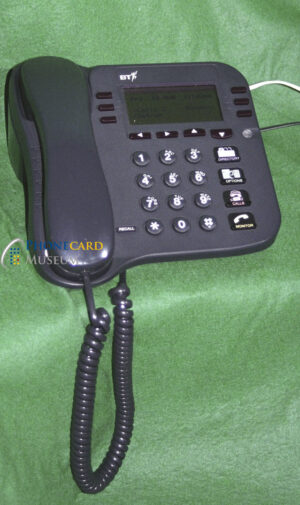 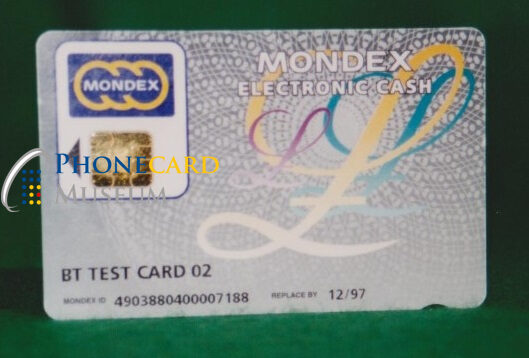 A number of international financial organisations became stakeholders in Mondex International and went on the launch their own trials of the product. This came to include Mastercard. As a major shareholder, Mastercard influenced a change in Logo reflecting the joined circles enclosing the name Mondex (3rd card above)

The various trials successfully demonstrated that the technology worked and there was excellent public acceptance of the process.  However, the commercial proposition was not sufficiently robust to support a widespread deployment of the product at that time - the smart card infrastructure was not as ubiquitous as it has now become and the world was not yet ready to embrace concept of digital cash.  Sadly, the various trials were progressively, concluded and Mondex International was absorbed into MasterCard in 2001.
If Mondex was launched 20 years later, we might have an entirely different SVC landscape.
We would like to Thank Bev Stevens for his help, and will expand this article with more detail soon