Ian Simmons began his work in Mondex E-purse, from the very beginning of Byte card development.
We will introduce cards from his important collection over the next weeks, and can proudly say that without his collection, most of the early Byte development would have remained forever unknown.
More detail to come.
Ian has sadly passed a few years back, but we can display his cards as his proud legacy.

We want to thank Patrice Peyret, Stéphanie Motré-Martin, and the wife of Ian, Heather, who have all played a part in keeping these cards safe, until we have adopted them into the museum's reference collection.
Mondex-Byte card

Chris Potts has been a great help in understanding the early Byte trial with the initial project name "Volga" and served as Program Director. Joining Natwest initially as head of commercial development, Chris became deputy CEO of Mondex International when it separated from Natwest.

Chris has had a long career in management of leading technology companies. His early career as a research scientist in the field of seismic data acquisition in the 1970s and 80s, has come full circle. Chris currently chairs the Guralp group, a leading company in the design, building, and implementation of complex seismic instrumentation, currently employed in many countries around the world.

Chris has been generous in donating some key cards, and publicity from early Mondex and Byte trials. Thanks so much Chris for your ongoing support.

Lisa played an important role as SVP of Mondex International, and was involved in Mondex pilot programs in Canada, and Latin America. She has donated a number of cards to enrich the museum collection.
Lisa holds an MBA from the prestigious L'Ecole Supérieure de Commerce in France, as the first-ever American to graduate from this elite Global Business School, and received her BA from Rutgers University in Economics.
Previous to the Mondex position, Lisa was Senior Vice President of MasterCard, she had P & L, product, and general management responsibility, and was instrumental in the launch of MasterCard’s global debit product (Maestro) in the US, Asia Pacific, and Europe. She also held management positions at Chase/Chemical Bank, and American Express in their Paris and New York locations.

After a 15 year long career in financial planning following on from Mondex, Lisa formed, and is President of, Wendel Financial Group, managing and assisting investment planning for over 300 accounts.

Thanks again Lisa, for your support.

Paul, who is one of the early pioneers in Visa Cash, joined Visa Australia in 1992, initially working with the normal magstripe cards. In 1994 he was brought into the new e-purse, and cash card development. Visa was re-engineering the cash card Danmont product.
Paul was the project manager of the world's first public pilot of the Visa Cash cards on the Gold Coast in Queensland, Australia. This pilot involved disposable cards initially, that could be used in large theme parks. By 1996 this was expanded to include re-loadable cards where enhanced ATM's could load cash onto the card.

The next generation of Visa Cash cards used PKI (Public Key infrastructure) and allowed global expansion of the product, where each terminal no longer need it's own cryptographic key.
Thus Paul was whisked away from sunny Gold Coast and golden beaches, to Leeds, in UK. Maybe a little less sunny? and a bit more rain?
Paul managed the implementation of this first PKI based Visa Cash trial in 1997-98. Though Paul finished with Visa Cash in 1998, he spent much of the next 20 years involved in EMV implementation in bank markets in Australia, New Zealand and Asia.

We thank Paul for his involvement in the card museum, and his key roles in cash card and subsequent EMV banking development. We hope you enjoy seeing some of the cards you handled, permanently on display under Visa Cash sections. Perhaps EMV too.

Paul Jennings is a retired banking executive based in Sydney, Australia.

Paul holds an honors degree in Mathematics and Computer Science from the University of Waterloo in Canada. He migrated to Australia in the late 1980’s as a management consultant. At Westpac, Paul held executive positions in Electronic Channels, Contact Centers and Information Technology. He oversaw the rapid growth of internet banking and online sales and faced the advent of online fraud. He became CIO at EFTPOS (Australia’s debit card scheme) where he developed the EFTPOS Hub as the mission critical national infrastructure supporting ATM/POS processing and transforming the business into mobile and online payments.
Thanks Paul for your support of the card museum project.

Michelle began a career in the United States Navy directly after finishing high school, and worked for 13 years as a weather observer, and then forecaster. Wanting something different, and more, she made the difficult decision to leave the Navy, and earned a bachelor's degree in marketing at the University of North Carolina, Greensboro. After working with Credit cards in the sports marketing area, Michelle moved to the Wachovia Corporation, working with magstripe ATM, and Debit cards. This was during the time of the Atlanta Olympics Visa Cash program, around 1996.

After Michelle led the debit/ATM card conversions for 4 bank acquisitions for Wachovia, she was selected as Wachovia’s first e-Banking Channel Smart Card Business Analyst. In this role, Michelle also became Implementation Manager for Wachovia’s Visa Cash pilot with US Treasury, issuing cards to basic training soldiers at Fort Jackson Army Post in Columbia, SC. She created the business requirements & technical specifications for in-house IT development, card design & creation, on-site Fort Jackson card-issuing process and terminal installation/support. With her years of military background, Michelle flourished in her role as the Wachovia liaison with the U.S. Army at Fort Jackson.
After the US Military discontinued cash card issuance through Wachovia, Michelle moved to involvement with chip card PKI sign-on cards. In 2001 her role was eliminated, and Michelle moved on to develop the Production Support model for Wachovia’s launch of its new Online Banking & Bill Payment platform.
Currently, Michelle, and her husband Phillip, run a small grain farm in Faison, NC. She is semi-retired, and living a more relaxed life with their 4 rescued pets. (3 dogs and one cat)

Michelle has supplied the Card museum with a comprehensive group of the Fort Jackson Visa Cash cards, and we want to thank her for supporting our project so generously.
Please see the Fort Jackson cards:.. Military cards

Tim began his involvement with Mondex in 1995 while it was part of Natwest Bank.  When Mondex International became independent, Tim became Executive Vice President of Mondex International and Head of the Americas Office.  He spent several years concentrating on Mondex opportunities in the Americas and particularly in Latin American markets.  He is currently retired and lives in New Jersey, USA.

Thanks for your support Tim.

Jack has been a great supporter of the Museum, and has really gone out of his way to give us a grounding in Multos. If Mondex was the mother of a large part of Smartcard programming and OS development, then Multos is the prodigy firstborn child, with a whole tribe of descendants in Smartcard programs and applications.
Jack began his influence on the Smartcard industry with Gemplus (Thales) from 1997, and his career as a senior technical consultant has led, via Mastercard, and Keycorp, to his current role with Multos International.
Jack passed his 3rd. degree black belt in Taekwondo at around 50 years old, not too shabby, so don't mess with him. He loves sailing SOLO in his Hunter 25 sailboat. It is a 7.5m long boat, well suited for family trips or SOLO, as Jack seems to enjoy. Lots of time to enjoy solitude out there "Captain Jack"? This seems to be a "THING" amongst the "old guys" from the card industries, taking time away to explore the world sailing. 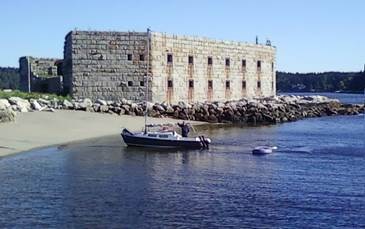 Jack has 3 grown sons, who may have heard a lot of his salty sea tales. No danger from Covid-19 out there ! Just the weather to deal with.

Jack has donated a small but important group of R&D cards from his time in Smartcards and Multos. More importantly, he has helped us appreciate the importance of the Multos evolution, and it's significance in general Smartcard advancement.
Thanks Jack. We appreciate your continued involvement in the Card Museum.