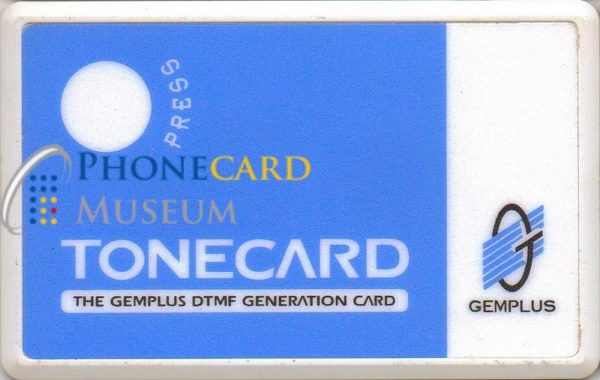 This Autodial DTMF Generation demo has a reverse similar to the Australian Key Call Token reverse. The reverse is covered with a clear green plastic in manufacture, which can be easily removed to show a white surface underneath. (not a variety)
In the early 90’s Gemplus were investigating new product types for Telephone cards.
IC technology they spliced with remote memory ideas to produce a hybrid technology we can call Autodial cards.
These cards incorporate sound production at the touch of a button in order to produce a series of dial tones. The series of tones produced would access the telephone network in the same way you would manually enter numbers on the keypad, but without the labour and inevitable dialling mistakes. After access is granted you would dial the telephone number manually.

Gemplus named the cards DTMF Generation Card (Dial Tone M? F?) or “TONECARD”
Telecom Australia conducted a limited internal trial and the cards were called Key Call Token
It is reported that only 500 cards were ordered.The trial was around 1992-3

Be the first to review “AUS-2012-AUTO-TST” Cancel reply